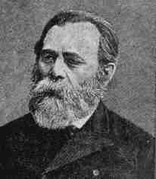 “If other national movements which have risen before our eyes were their own
justification, can it still be questioned whether the Jews have a similar right? They play
a larger part in the life of the civilized nations, and they have rendered greater service
to humanity; they have a greater past and history, a common, unmixed descent, an
indestructible vigor, an unshakable faith, and an unexampled martyrology; the peoples
have sinned against them more grievously than against any other nation. Is not that
enough to make them capable and worthy of possessing a fatherland? The struggle of
the Jews for national unity and independence as an established nation not only
possesses the inherent justification that belongs to the struggle of every oppressed
people, but it is also calculated to win the support of the people by whom we are
now unwanted. This struggle must become an irresistible factor of contemporary
international politics and destined for future greatness.”
– Leon Pinsker, Russian-Jewish physician and Zionist. 1821 – 1891 AD

“As long as the world lasts, all who want to make progress in
righteousness will come to Israel for inspiration as to the people
who had the sense for righteousness most glowing and strongest.”
– Matthew Arnold, English poet and cultural critic. 1822 – 1888 AD

“The idea itself is natural, fine and just. Who can challenge the rights of the
Jews in Palestine? Good Lord, historically it is really your country. What a
wonderful spectacle that will be when a people as resourceful as the Jews
will once again be an independent nation, honored and complacent, able to
make its contribution to needy humanity in the field of morals, as in the past.”
– Yousef al-Khalidi, Palestinian Arab mayor of Jerusalem. 1829 – 1907 AD

“The Jew is that sacred being who has brought down from heaven the everlasting fire, and has
illumined with it the entire world. He is the religious source, spring, and fountain out of which all
the rest of the peoples have drawn their beliefs and their religions. The Jew is the pioneer of liberty.
Even in those olden days, when the people were divided into but two distinct classes, slaves and
masters – even so long ago had the law of Moses prohibited the practice of keeping a person in bondage for more than six years. The Jew is the pioneer of civilization. Ignorance was condemned in olden Palestine more even than it is today in civilized Europe. Moreover, in those wild and barbarous days, when neither life nor the death of anyone counted for anything at all, Rabbi Akiba did not refrain from expressing himself openly against capital punishment, a practice which is recognized today as a highly civilized way of punishment. The Jew is the emblem of civil and religious toleration. ‘Love the stranger and the sojourner’, Moses commands, ‘because you have been strangers in the land of Egypt.'”
– Leo Tolstoy, Russian novelist, moral thinker and social reformer. 1831 – 1902 AD

“What invested the Jew of all times with an economic, and in part also spiritual,
superiority over other people has been, first, his thrift and temperance, cultivated
by his religious law and moral code; second, his actually boundless attachment to
and care of his wife and children; and third, his capacity and desire for learning,
which stands out even more significantly and irresistibly among the poor than
among the rich.”
– Dr. Isaac Rülf, rabbi of Memel in East Prussia. 1831 – 1902 AD

“If the statistics are right, the Jews constitute but one per cent of the human
race. It suggests a nebulous dim puff of star-dust lost in the blaze of the Milky
Way. Properly the Jew ought hardly to be heard of; but he is heard of, has always
been heard of. He is as prominent on the planet as any other people, and his
commercial importance is extravagantly out of proportion to the smallness of his
bulk. His contributions to the world’s list of great names in literature, science, art,
music, finance, medicine, and abstruse learning are also away out of proportion to
the weakness of his numbers.”
– Mark Twain, American author. 1835 – 1910 AD

“We Gentiles owe our life to Israel. It is Israel who has brought us the message
that God is one, and that God is a just and righteous God, and demands
righteousness of his children. It is Israel that has brought us the message that
God is our Father. It is Israel who, in bringing us the divine law, has laid the
foundation of liberty. It is Israel who had the first free institutions the world
ever saw. When our own unchristian prejudices flame out against the Jewish
people, let us remember that all that we have and all that we are we owe,
under God, to what Judaism has given us.”
– Lyman Abbott, American theologian, editor and author. 1835 – 1922 AD

“Why shall not the powers which under the treaty of Berlin, in 1878, gave Bulgaria to the Bulgarians and Serbia
to the Serbians now give Palestine back to the Jews?…These provinces, as well as Romania, Montenegro, and
Greece, were wrested from the Turks and given to their natural owners. Does not Palestine as rightfully belong
to the Jews? (…) The general law of dereliction does not apply to the Jews in regard to Palestine, for they never
abandoned the land. They made no treaty; they did not even surrender. They simply succumbed, after the most
desperate conflict, to the overwhelming power of the Romans. (…) According to God’s distribution of nations,
Palestine is their home – an inalienable possession from which they were expelled by force… Let us now restore
them to the land of which they were so cruelly despoiled by our Roman ancestors.”
– William Eugene Blackstone, American evangelist and Christian Zionist. 1841 – 1935 AD

I believe that the Jewish people are realizing their destiny though Zionism, the gathering of the people from the four corners of the globe and building a country and unique society. In my eyes, these investments lead to the higher goal of becoming a “light unto the nations.” I believe that peace can be achieved in the Middle East through mutual respect and appreciation that does not require Israel relinquishing any part of its land or compromising its security.

Visit the Shomron (the west bank) to see the facts on the ground for yourself. Heartland #Israelhttps://t.co/XM1qoHQBrJ pic.twitter.com/2zvO4YUIRV